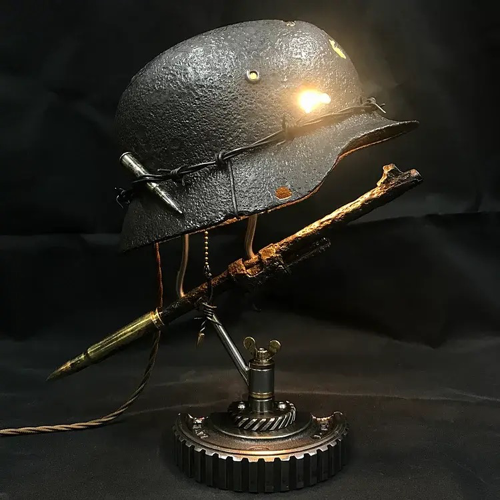 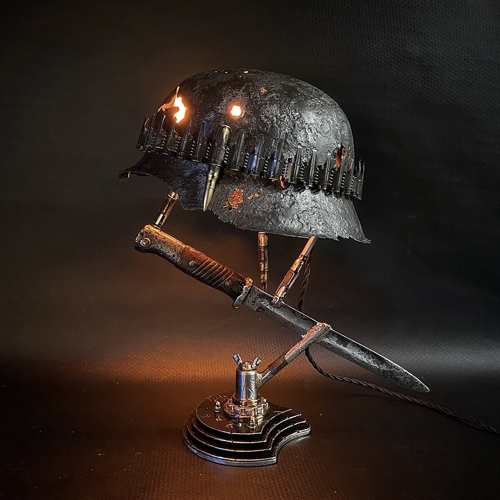 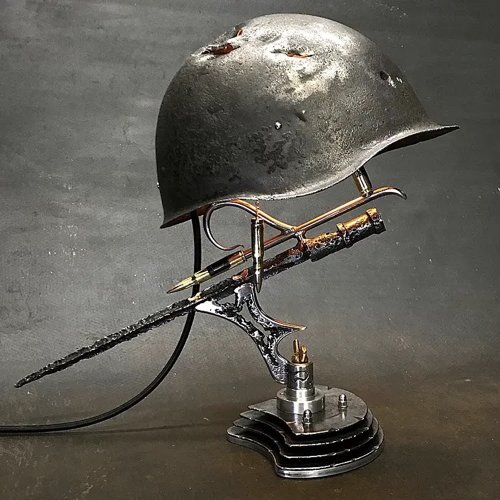 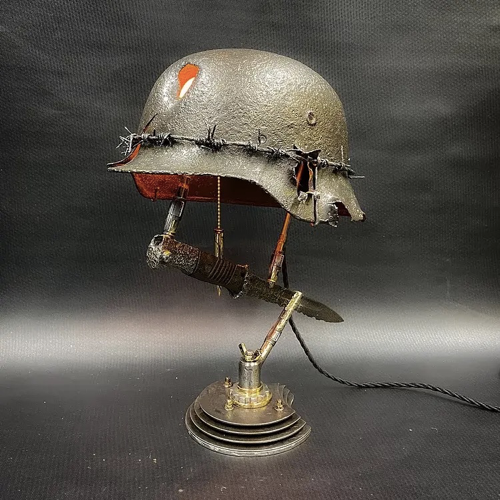 Each lamp is made of resin restoration of World War II helmet, bayonet and bullets. You can find their number on the helmet. I spent three years recycling these helmets and bayonets, and I traveled all over Europe. The bullet holes and rust on the helmet are traces of World War II. These helmets bear witness to that cruel history.

This is a very meaningful work of art，World War II was a global war that lasted from 1939 to 1945.Some 60 million people died in the war, including about 20 million military personnel and 40 million civilians.Many of the civilians died because of deliberate genocide, massacres, mass bombings, disease, and starvation.

Therefore, we developed this World War II relic light to commemorate and remember that terrible history，In memory of all those who lost their lives in that war！


Battle Lamp-1
The lamp is made from genuine WW2 Battle relics.
The Helmet is a German M1942 and was recovered from the 1944 Narva battlefield in Estonia. The helmet has lots of battle damage but is still solid, i've stabalised the crack on the side with very small welds (see last photo) the welds are covered by the bullet belt so cant be seen.
The bayonet is a German K98 recovered from Berlin Lamp is fitted with a 3 mode flame effect LED bulb, there's a video on the home page showing the flame effect.
The lamp has been professionaly wired and has passed a UK PAT electrical safety test.

Battle Lamp-2
The lamp is made from genuine WW2 Battle relics.

The German M1940 helmet was recovered from Stalingrad, the helmet has lots of paint remaining including small amounts of white which suggests this was once painted winter camo.

The helmet has significant battle damage and has multiple bullets holes, the team that recovered this said that spent rounds from a Russian Mosin-Nagant rifle were found close by.

The barbed wire is German WW2 and was recovered from the Netherlands.

The bayonet with Bakelite grips still intact is a German k98 which was recovered from Germany.

Made using a genuine WW2 Soviet helmet and bayonet recovered from WW2 battlefields in Eastern Europe.

Made from genuine battle relics